When I was asked to interview prolific Edinburgh crime novelist Ian Rankin, who can boast writing one blockbuster each year for approximately the last 24 years,  I wondered if it would be humanly possible to read just one in 24 hours having never read any of them. I decided no it wasn't.  But we could have a chat anyway.
Having done my research, I realised we had loads in common. He drinks beer, I don't. He loves rock music, I don't. He lives in Edinburgh....and I don't.  I just knew we would hit it off. So away I went making my way through the snow in my favourite high-heeled suede boots - yes I said suede and snow in the same breath - as  confidence was needed to meet one of the world's top twenty authors signing his latest offering Standing In Another Man's Grave. It never fails to surprise me when interviewing famous people, how surprisingly non-famous they surprisingly are if you catch my drift.  As I waited in a freezing cold badly lit corridor with only our little camera crew for company and debating if my nose really would look that blue on screen, the janitor ambled towards us. I was just about to ask him what time he expected Rankin and his entourage to arrive and if there was any chance of a wee cup of tea, when he said: "I believe someone is waiting to interview me". 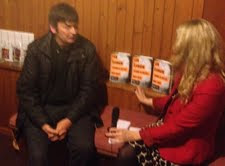 In my defence, it was a particularly dark corridor with a strange red bulb that cast a shadowy hue over anyone over 5' 5"- in other words taller than me. And tall Mr Rankin most certainly is.
However, his esteemed height was not the only enlightening factor. Ian Rankin was graciously engaging and appeared genuinely interested in what he was being asked despite the fact that he has probably answered the same old questions more times than you could shake a paperback at.
As I shook hands with him and thanked him for giving us his time and to let him get ready for his talk to the amassing throngs, I happened to glance down at his feet.  In the next instant our eyes locked. We both knew and understood with a barely imperceptible nod. I wasn't the only one wearing my suede confidence that snowy night! 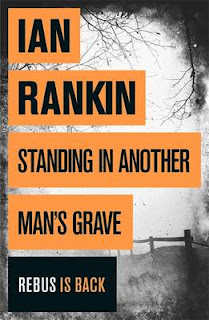 Buy Ian Rankin's new Rebus book Standing In Another Man's Grave at Waterstones Online
Posted by Unknown at 05:26 No comments:

Email ThisBlogThis!Share to TwitterShare to FacebookShare to Pinterest
Labels: Ian Rankin in Perth

Neil Oliver talks Vikings in Waterstones in Perth
Striding towards me with a mane of glossy black luxuriant long hair that most women would happily dye for - pardon the pun - I felt that I was about to be introduced to an infamous Viking warrior. However it was, of course, well-loved TV broadcaster, historian and archaeologist Neil Oliver - the one with a voice that sounds like melting chocolate - who was signing his latest book Vikings in the Perth branch of Waterstones.
As I interviewed him for Perthshireonline.tv, I tried my best to be riveted by all he had to say about our ancient ancestors. But having a substantial amount of blonde tresses myself, all I could think about was are those locks natural? How does he get it to look so glossy? What brand of shampoo or secret ingredient conditioner does he use?

Once Neil gets talking about his subject, it's quite tricky to get a word in edgeways.  I would hate to appear rude and interrupt the softly spoken man in full flow, but wait my chance for him to draw breath and wrestle back control of the interview. Whilst I'm fascinated to hear of the expanding Viking empire of long gone ages, I wonder inwardly if he would mind me asking if he uses some natural preparation to control any wry grey hairs. It's just so shiny!
Oh yes, getting back to the Vikings. Fascinating stuff. Especially when he described sampling such ancient delicacies as rotten shark, testicle pate and sheep brains. Neil's the kind of man who would view a few wiggly jungle grubs in I'm A Celebrity as a tasty starter. He definitely gets my vote!!
To watch my interview with the lovely Neil Oliver 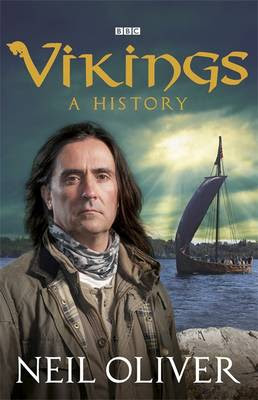 Interview with a Green Man

Interview With A Green Man

At first I thought I was seeing little green men today but this turned out to be one of my most unusual interviewees, Green Lycra Man, who was pedalying his little heart out outside my local Tesco supermarket.  Well done to fitness entrepreneur Ben Cooling, owner of the Fit4less gym, who was raising money for Children in Need.  I think by the end of his four hour marathon he was the one in need of a lie down! 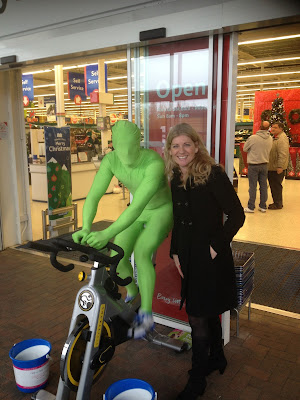 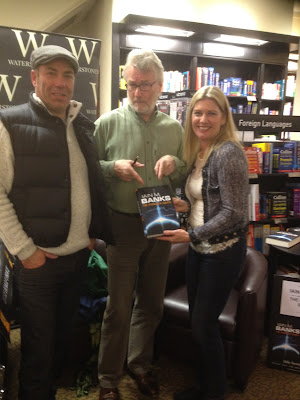 When I was asked to interview sci-fi literary legend Iain M Banks at his book signing of his latest tome in Waterstones in Perth last month, I had to admit that I have never read a single one of his 27 books. So, I was pretty sure that it wouldn't take him five minutes to rumble that I wasn't exactly a fan!
However, all I can say is I am now.  His delightful easy going manner and down to earth style made interviewing him a complete pleasure. His books may be of a certain genre, but I can understand why he has such a huge following. It may have taken him ten years to become an overnight success but the wait was worth it!!
His new novel The Hydrogen Sonata is the latest in his Culture series. As Iain put it himself it is packed with "more stuff and loads of explosions". Something his legions of followers have come to expect.
Highly acclaimed for his mainstream fiction as well, Iain is also looking forward to some of his other novels hitting the small screen and joining the likes of The Crow Road which was shown as a four-part mini series for the BBC.
Click on this link to see the video of my interview with Iain M Banks

Purchase The Hydrogen Sonata  online at Amazon or at Perth Waterstones bookshop. 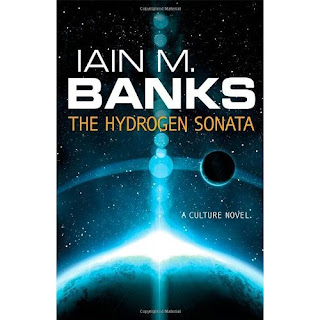 Over the last few months I have been privileged to meet and interview some really interesting people and none more so than prolific Edinburgh writer Alexander McCall Smith.  To describe him as famous is like saying Beluga caviar tastes nice .... a bit of an understatement! With the number of books he's written now reaching triple figures, the man is quite frankly a literary phenomenon.  So I'm sure you can understand why I felt just a shade nervous as I parked my little mini in the grounds of Scone Palace - I almost threw up in their exquisitely manicured car park.

However, I needn't have worried. Sandy and I were soon chatting away like old pals about the latest endeavours of six year old Bertie in his latest novel Sunshine on Scotland Street.  Also can't wait to read his new novel Trains and Lovers due to hit the shelves sometime in November. Hope you enjoy the interview xx
See the video of the interview 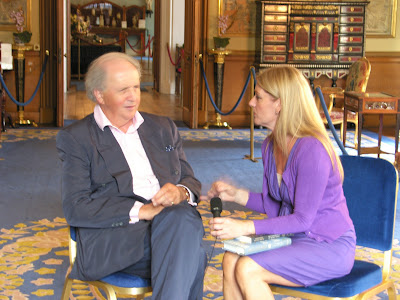 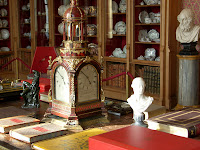 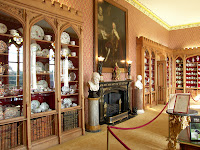 Waterfall at The Hermitage Dunkeld Perthshire

Waterfall at The Hermitage Dunkeld Perthshire
This is a favourite place I like to walk and think after a busy week of interviews and writing. The air is clear clean and fresh,you feel renewed.

Email ThisBlogThis!Share to TwitterShare to FacebookShare to Pinterest
Labels: Waterfall at The Hermitage Dunkeld Perthshire
Home
Subscribe to: Posts (Atom)
Welcome to Vyvyen in Perth
Writer, journalist, interviewer, working in Perth Perthshire Scotland. I will write about interesting people and places in Perth Scotland